Azerbaijan Receives Minsk Group Delegation
On December 12, Azerbaijan’s President Ilham Aliyev received officials of the Minsk Group from France and the United States in Baku. Aliyev met with OSCE Minsk Group Co-Chair Stefan Visconti from France, U.S. Co-Chair Andrew Shaffer, Russian Ambassador to Azerbaijan Mikhail Bocharnikov, and Representative of the OSCE Chairman-in-Office Andrzej Kasprzyk. In his address to the delegation, President Aliyev highlighted the ineffectiveness of the Minsk Group, noting that over the course of 28 years, no resolution was established. The Minsk Group representatives said that they are willing to participate in the ‘transition phase’ of the region.

Russian MP Claims Right of Self-Determination in Karabakh
In an online discussion, Konstantin Zatulin, the First Deputy Chairman of the Committee of the State Duma for the CIS and Relations with Russian Nationals Abroad, stated his belief that the people of Nagorno-Karabakh should have the right to self-determination. Zatulin said that Azerbaijan needs to reconsider its claims to the territory, which directly contrasts with international law. In the recent Nagorno-Karabakh conflict, Russia did not become directly involved militarily because of its recognition of Nagorno-Karabakh as the territory of the Republic of Azerbaijan.

Belarus Will Close Land Borders, Citing COVID-19 Fears
Belarus announced that it will close its land borders on Dec. 19th for Belarusians traveling on non-work or study-related trips. Officials stated that the travel ban will lower COVID-19 infection rates, which had reached 1975 individuals per day. Opposition leader Svitlana Tsikhanouskaya compared the ban to the Soviet-style Gulag attempting to prevent brain drain, citing Lukashenko’s previous carelessness towards the pandemic.

Germany, France, Ukraine Condemn Russian-Abkhazian Integration Talks
After Russian President Vladimir Putin and the de-facto leader of Abkhazia Aslan Bzhania met on November 12, a plan to create a common socio-economic space between Russia and Russian-occupied Abkhazia was announced. Ukraine’s Foreign Ministry condemned the agreement, labeling it as ‘another attempt to annex the Russian-occupied territories of Georgia.’ Germany and France echoed this sentiment in a joint statement, affirming ‘support for the territorial integrity and sovereignty of Georgia within its internationally recognized borders.’ Ukraine, Germany, and France repeated their call that all parties concerned should fully implement the EU-mediated August 12, 2008 ceasefire agreement.

Geneva International Discussions Held for First Time in 2020
The participants of the Geneva International Discussions gathered for the first (and only) time in 2020 to discuss the security and humanitarian issues surrounding Georgia’s occupied South Ossetia. The GID co-chairs, from the European Union, United Nations, and OSCE, reported that the current situation is stable. Conversations on the status of internally displaced persons and refugees were undermined by a walkout of some participants. Georgian officials welcomed the resumption of the Incident Prevention and Response Mechanism (IPRM)  meetings in Ergneti and emphasized the need to resume Gali IPRM meetings as well. The next round of discussions is planned to take place on March 23-24, 2021 in Geneva, Switzerland. Source: agenda.ge

Crimean Tatar Rights Activist Sentenced to 14 Years
Russian Military Court sentenced a Crimean Tatar human rights activist, Server Mustafayev to 14 years in a strict penal colony. Amnesty International released a statement demanding Mustafayev’s immediate release on grounds of freedom of speech.Owner of Tatar TV Channel Sentenced to 19 Years
Russian Supreme Court of Crimea sentenced in absentia the owner of the Tatar ATR TV channel, Lenur Islyamov, to 19 years in a high-security penal colony, charging him with the creation of armed formation and organization of sabotage in Crimea. Officials representing Islyamov said he will file an appeal to the European Court on Human Rights.

ICC Concluded Preliminary Examination of Armed Conflicts in Donbas and Crimea
The International Criminal Court (ICC) announced the conclusion of the preliminary examination of the situation in Crimea, Donetsk and Luhansk regions. The Court found a reasonable basis to believe the regions experienced “a broad range of war crimes and crimes against humanity.” Judges of the Pre-Trial Chamber of the Court must carry out the further decision to investigate the crimes. The examination first launched on Apr. 24th, 2014.
UN General Assembly Urges Russia to Withdraw From Crimea
The UN General Assembly passed a nonbinding resolution urging Russia to de-occupy Crimea and withdraw its military forces from the peninsula. It calls Russia to stop the transfer of advanced weapon systems like nuclear-capable aircraft and missiles, weapons, ammunition and military personnel to Crimea. The resolution was supported by 63 countries, rejected by 17 and abstained by 62.

OSCE Reports 622 Ceasefire Violations, Civilian Damage in Donetsk City
From Dec. 7 to Dec. 13, OSCE reported 477 violations of ceasefire agreements in Donetsk and 145 in Luhansk. The Special Monitoring Mission to Ukraine (SMM) observed damage to a residence in Donetsk city and anti-tank mines on both sides of the contact line in Donetsk Oblast. The Mission reported weapons in violation of withdrawal lines in non-government-controlled areas in both regions on four separate days. OSCE’s movement was restricted by armed formations near non-government-controlled  Korsun and Oleksandrivske in Donetsk Oblast.

Amnesty International Reports Increased Gender-Based Violence In Ukraine’s East
Amnesty International said the armed conflict in Donetsk and Luhansk regions intensified domestic violence against women. The human rights watchdog attributed the increase to “the military presence, a lack of security, the absence of erosion of the rule of law, and the pervasiveness of actual or perceived impunity for the perpetrators.”

Azerbaijan Government Reports Acts of Terrorism Caused by Rogue Armenian Soldiers
Following the signing of the trilateral peace agreement between Armenia, Azerbaijan, and Russia, groups of Armenian armed forces remained in the forest areas northwest of Hadrut in the Khojavend region of Azerbaijan. Armenian officials claim that groups of soldiers were lost in the woods, but Russian peacekeepers and Azerbaijani forces revealed that these soldiers had instead created battle positions and led attacks on villages of the Khojavend region. The State Security Service of the Republic of Azerbaijan has commenced anti-terror operations in the area in cooperation with Russian peacekeeping forces.

Russian Peacekeepers Confirm First Ceasefire Violation
On December 12, Armenia and Azerbaijan accused each other of breaking the ceasefire agreement established in early November. The Ministry of Defense of Azerbaijan reported that four Azerbaijani soldiers were killed when their units were attacked in areas adjacent to Nagorno-Karabakh, and Armenian authorities reported that six soldiers had been wounded. The Armenian army also reported ‘intrusions’ by Azerbaijani forces into the villages of Hin Tagher and Khtsaberd. These villages remain under Armenian control but are entirely surrounded by territories captured by Azerbaijani forces during the war.

Armenia’s Responsibility in Destruction of History and Culture of AzerbaijanDecember 23, 2020
December 15 – December 22December 29, 2020 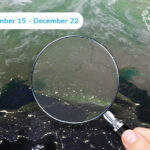