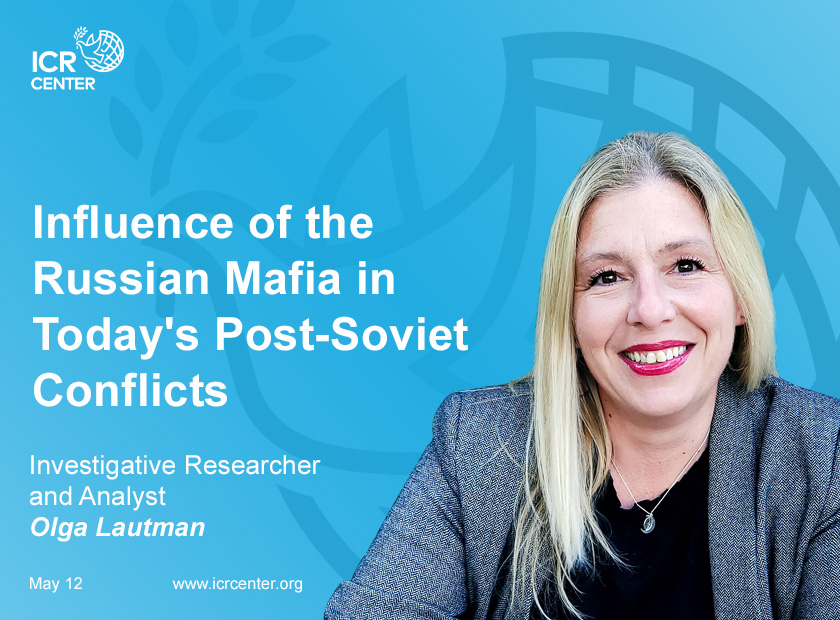 The 1990s saw the emergence of the Russian mafia as a powerful force in Russian political and social life. Under President Putin’s patronage, the mafia has become an extension of the Russian state. Join us as ICR Center Chair Christopher Chambers talks with journalist Olga Lautman on the influence of the criminal underworld in the frozen conflicts plaguing the former Soviet Union. 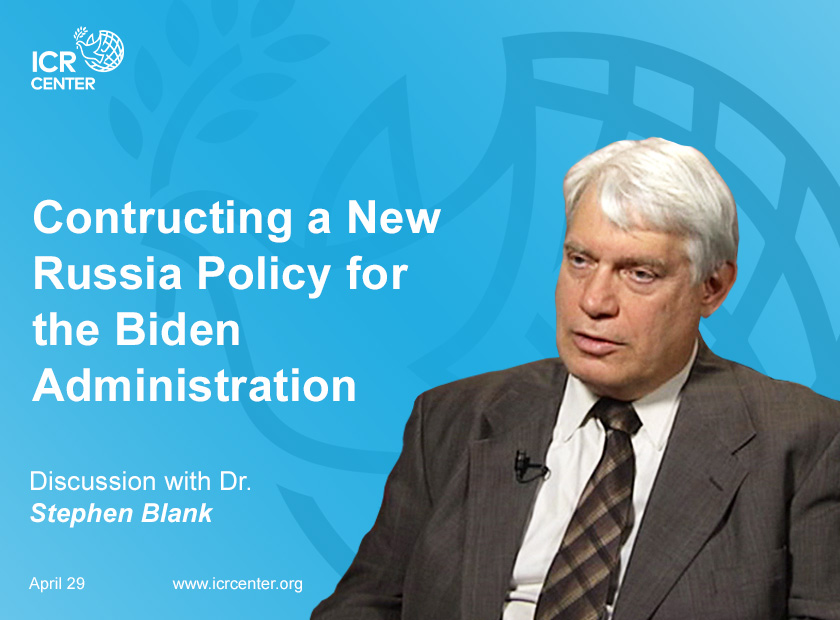 The Donbas Crisis has shown that the U.S. and European policy on Russia is in desperate need of review. Join the International Conflict Resolution Center’s Chair Professor Chirstopher Chambers as he talks with Dr. Stephen Blank, a Senior Fellow at the Foreign Policy Research Institute’s Eurasia Program, to learn what a new and effective Russia policy for the Biden Administration would look like. 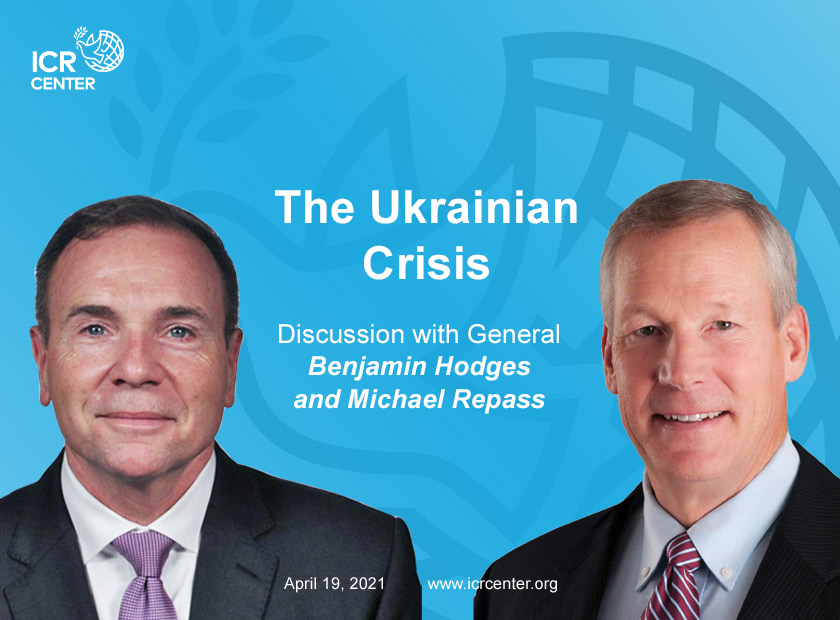 The Ukrainian Crisis: A Conversation with Generals Benjamin Hodges and Michael Repass 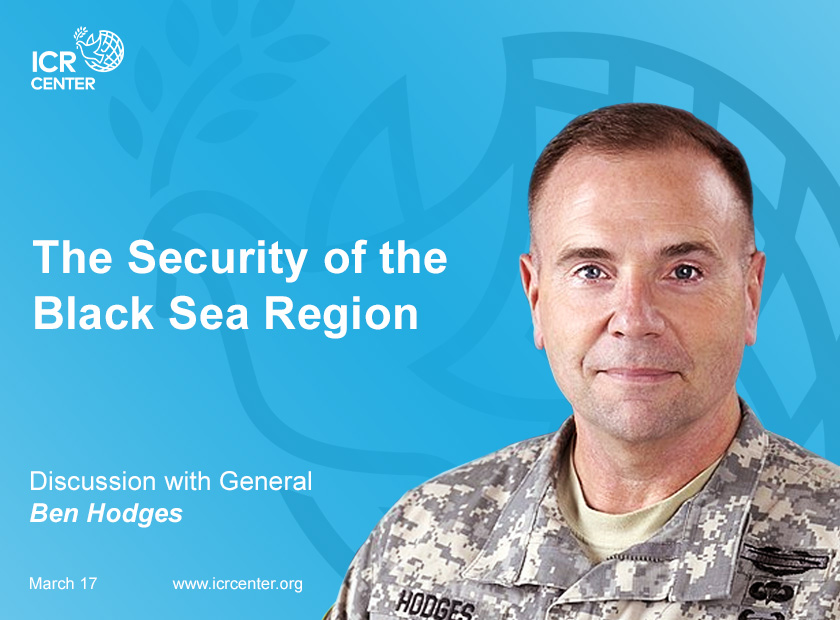 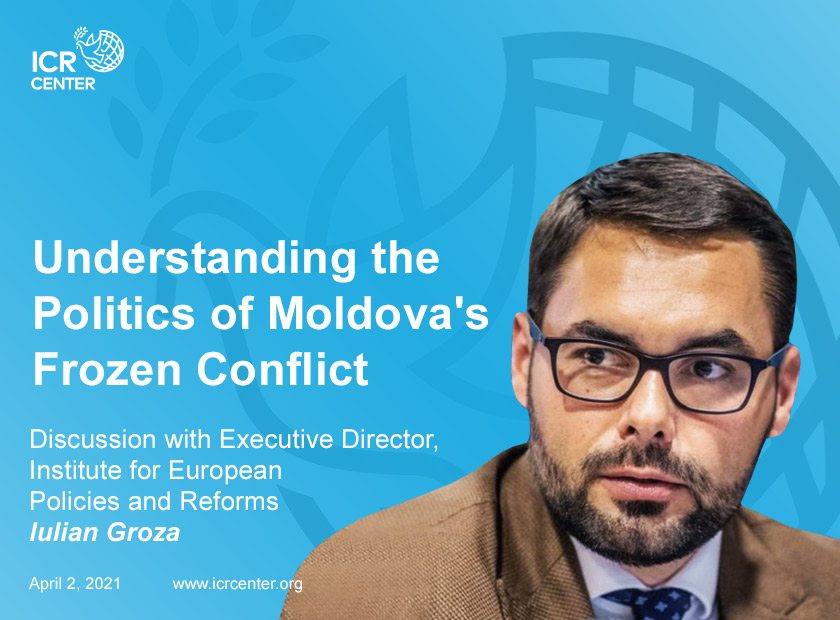 Understanding the Politics of Moldova’s Frozen Conflict: An Interview with Executive Director of the Institute for European Policies and Reforms and Board Member of the Institute of Strategic Initiatives Iulian Groza.

In this interview, ICR Center Chair Professor Christopher Chambers sits down with Iulian Groza, the Executive Director of the Institute for European Policies and Reforms and Board Member of the Institute of Strategic Initiatives. Learn about the history of the frozen conflict in Moldova and its effects on the country’s politics and relations with its neighbors. 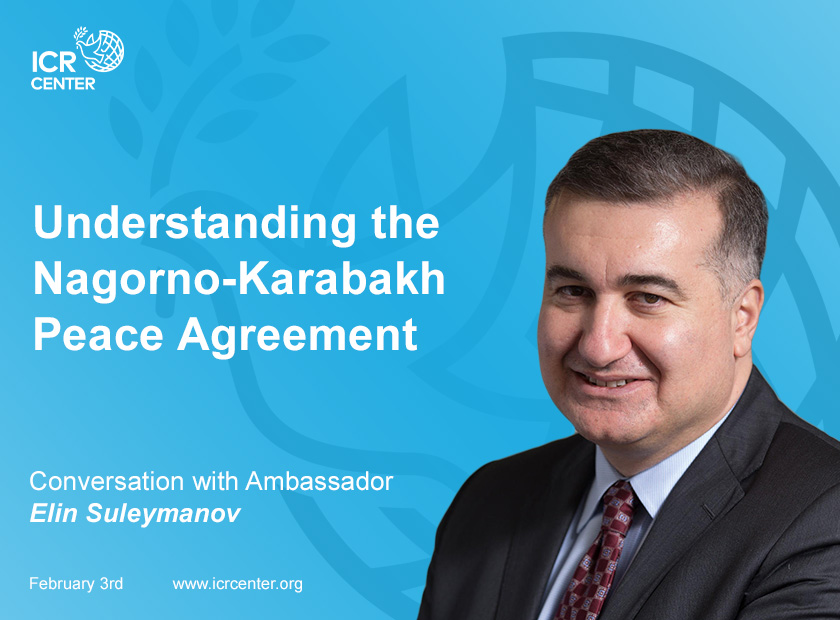 Interview with Elin Suleymnov, Ambassador of the United States from the Republic of Azerbaijan

Professor Christopher Chambers: how is Azerbaijan approaching the peace agreement? How is Azerbaijan navigating this when emotions are still running high on both sides after the end of the war?

Ambassador Suleymanov: We need to prepare the populations for peace. This has been discussed in the past, and the Minsk Group should make this a priority. They haven’t done enough on this in the past. The Minsk Group should have made it clear that peace based on international law would be inevitable. They did not make it clear to Armenia that sooner or later, this would happen.

The international community could have done a better job in facilitating communication between Armenia and Azerbaijan. Armenia has failed to recognize existence of the Azerbaijani community of Nagorno-Karabakh. The Minsk Group has facilitated some communications, created outlines, discussed the restoration of territorial integrity, but the main accomplishment was doing shuttle diplomacy. Perhaps now they can build on this to promote dialogue.

The Armenian lobby fears that it is losing relevance, and they want to maintain their relevance. The lobby is very afraid that people in Armenia are not as extreme as they are. Armenians are of course upset by war, and the human loss is not easy for either side. Armenians understand that there is a reason for mass immigration, poverty, and why they lost the war. They realize that they need to coexist, and the best way to do this would be to increase integration with Azerbaijan and the rest of the region. The best way to secure growth would be to have friendly, neighborly relations with Azerbaijan.

Professor Christopher Chambers: there are many components not addressed in the peace agreement – what are some of the considerations from the Azerbaijani side about what is open to interpretation and what is iron clad? Do you have any thoughts on this, specifically the peace agreement?

Ambassador Suleymanov: This agreement is the most comprehensive and important document in the history of this conflict and the history of independent Armenia and Azerbaijan. It does not include every detail because it was signed immediately after capitulation by Armenia. The key factors are included: the Armenian military withdraws, recognition of Azerbaijan’s territory, processes of normalization, and the key factor of resuming links, communications, and transportation.

Nobody questions the importance of returning prisoners of war. POWs and detainees are important issues, but these are in some ways, technical.

The communication channels have been generally described, but now there are working groups for further development of communications and adding specific content to the statements of the agreement.

The agreement by itself is not really open to interpretation. Some parts are very specific, such as the number of Russian peacekeepers, armored vehicles, etcetera. The most effort was put into this.

Professor Christopher Chambers: the war affirmed the territorial integrity of Azerbaijan, but a separatist movement is still operating inside the territory. What can Azerbaijan do to work towards peace with this condition still existing?

Ambassador Suleymanov: In all agreements, including this one, which was signed by the Prime Minister of Armenia, the entity of an independent Nagorno-Karabakh does not exist. [Independent] Nagorno-Karabakh never existed legally anyway, and there is no legal basis for its existence.

The problem with the situation is that to deal with it, you have to introduce force, which we don’t want to do. At the moment, this is an exclusive responsibility of the Russian peacekeepers. There is no higher authority in the Russian Federation than President Putin. Russian peacekeepers on the ground have to follow the guidelines established by their Commander in Chief [President Putin].

At this moment, it’s just a matter of time. There will be attempts to play games of course. For the past 30 years, people pretended that [independent Nagorno-Karabakh] existed, but it never did.

For now, there is too much focus on this put and there is not much relevance.

There are much more important issues at hand, primarily the rehabilitation of the region.

Ambassador Suleymanov: There are many aspects to this. There is no infrastructure, if you look at what has been done, if you go into all of the areas that Armenia controlled outside of Nagorno-Karabakh, there is total destruction. The Armenian diaspora gathered millions of dollars to support this for decades. There was also some support from the U.S. government, which went to demining, but now we can see the extent of the laying mines instead.

There is a high amount of corruption, no investment in the territories, and nothing has been done. There was deliberate destruction, and ill intention. There was never a real effort to live in those territories, and this is an important indication of how emotional and impractical the Armenian policy has been.

Armenia’s day of real independence is not in 1991. Armenia’s real day of independence is November 10, 2020. For the last 30 years, it has been an outpost rather than a sovereign Nation, and completely dependent.

There are now two approaches. One, the government of Azerbaijan will pursue legal action. A case has already been filed against Armenia in the European Court of Human Rights, for example. Two, there will be legal action against companies and individuals. Titles and concessions were given for natural resources and legal action will continue.

The Azerbaijani government has already initiated reconstruction in the liberated areas. One of the most interesting things is that right behind the military were teams restoring communication and power lines. Azerbaijan has full intention of rebuilding the liberated territories.

The territories will be rebuilt and reconstructed, but there is also a strong effort for making the region a center for innovation in the future. With what Azerbaijan has been able to achieve in regional cooperation, this should be possible.

Professor Christopher Chambers: what do the next 6 months, 1 year, and 5 years look like in Nagorno-Karabakh to you?

Ambassador Suleymanov: When we began our conversation, you mentioned how emotions cloud judgement. There should be a passion for good, for reconstruction, and for peace.

In the past 3 decades, Armenian emotions didn’t translate to anything practical other than destruction. In order to build peace and normalcy, we need to facilitate economic, socioeconomic, and political foundations.

In the next 6 months, there should be a specific program put together including economic incentives, tax breaks, investment opportunities to encourage reconstruction and engagement of the international community, IMF, and World Bank.

The Turkish-Russian joint [monitoring] center just began operating, but we want more clarity on the Russian peacekeeping mandate, and how we define that.

The key factor in the enormous territory is that we should see some significant land mine clearing actions to be able to begin to see some results in returning civilians to their homes. HALO Trust, a British NGO operating as the sole provider of demining efforts, has worked there without Azerbaijani authorization, repeatedly violating Azerbaijani laws. The organization’s justification was that they were there for demining, but in reality, they trained local people how to plant mines, and this is especially disturbing considering that Americans provided funding.

In 12 months, all of these things described should go deeper: more areas should be demined, there should be better contact, more progress in communication, and customs and security procedures should be established.

Professor Christopher Chambers: what do you think the role of Turkey might be going forward? We talked at length about Russia, do you think there are advantages or disadvantages for greater Turkish involvement?

Ambassador Suleymanov: I don’t see any disadvantages to greater Turkish involvement. Why does Turkey matter? Turkey has shown recently that it can play a serious role in the region, and that it is a significant contributor to peace and security. We talk about Russia and Iran, but Turkey is the only country that borders all three South Caucasus nations.

Turkey is also a member of the Minsk Group. The Minsk Group met frequently with Turkey in Ankara, and they wouldn’t do this if Turkey didn’t matter. Turkey is already present, but needs to be more present, especially in the reconstruction efforts. Turkey also has good experience in monitoring and maintaining peace operations.

Imagine if Turkey was not fully involved: what would Armenia do? Then it wouldn’t be possible to open the border between Armenia and Turkey, and without Turkey’s involvement, Armenia would remain isolated.

Professor Christopher Chambers: do you think there is a danger that militant forces within Armenia would look at Turkish involvement as a slap in their face? They have used Turkey as a foil to justify certain behaviors. Are you concerned about this?

Professor Christopher Chambers: are there any concrete or specific proposals for creating that dialogue moving forward? Either inside or outside the agreement?

Ambassador Suleymanov: Presidents Aliyev and Erdoğan have spoken about the need for a regional platform in the 3+3 format [Russia, Iran, Turkey and Azerbaijan, Armenia, and Georgia]. This is not an easy thing to do when there are many differing views, Russia and Georgia and Armenia and Turkey.

Reality has shown us that we need to find a regional solution to our problems. The key actors should be regional actors. Once we open up communications, begin transportation, and economic cooperation, Armenians and Azerbaijanis need to relearn how to live with each other. When this happens, many of the questions that you have now will go away.

In many ways we are close to each other, so I don’t know why we can’t live together, but this takes time; integration solves most of the grievances historically. We need to find common points: music, cuisine, dances.

There is a bright future, and a unique opportunity to build a regional cooperation project, which in the long term is beneficial for the U.S., Central Asia, and Eastern Europe.