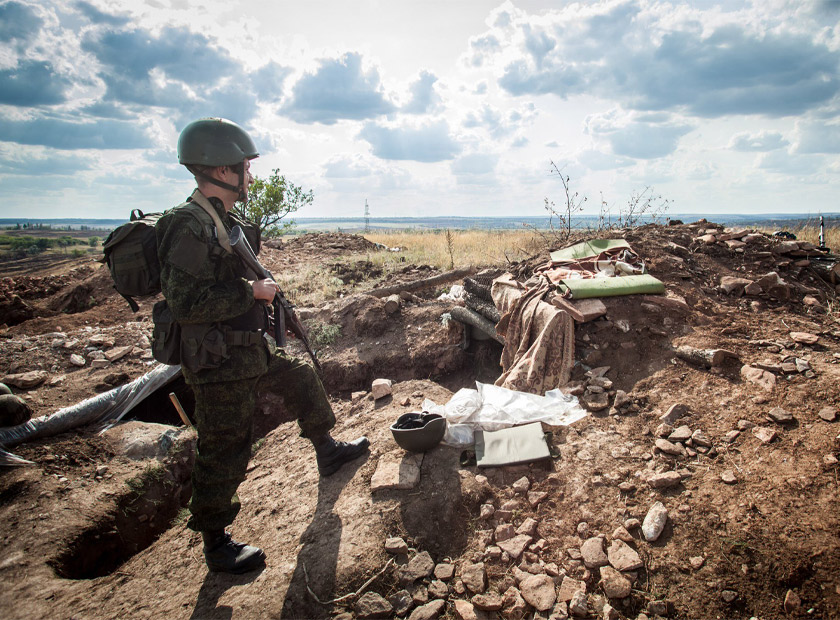 The April Donbas Crisis was a revealing moment in the seven years of war that has enveloped Ukraine. Across the Atlantic, U.S. President Joseph Biden has shown that the United States stands with Ukraine and has rallied important NATO countries like the United Kingdom and Turkey behind Ukraine. The Crisis has confirmed Russian President Vladimir Putin’s (current) disinterest in a negotiated, peaceful resolution to the Donbas conflict. New dividing lines have settled across Europe as former Eastern Bloc countries, starting with Czechia, are expelling Russian diplomats in solidarity with Ukraine.

But the most striking (though unsurprising) reveal of the Crisis were the weak responses from Berlin and Paris. During the Crisis, Berlin called on both Kyiv and Moscow to deescalate the situation, as if there was an equivalency between the actions of Russia and Ukraine. French President Emmanuel Macron said nothing until he met with Ukrainian President Volodymyr Zelensky on April 16, two weeks into the crisis.

Given that France and Germany are part of the Normandy Format, such a blasé interest in Ukraine’s security is highly disappointing to those who wish for the Donbas Conflict to have a peaceful resolution. Created in 2014, the Normandy Format, which is comprised of France, Germany, Russia, and Ukraine, led to the oft-violated 2015 Minsk II ceasefire agreement.

Germany continues working with Russia on the dangerous Nord Stream 2 gas pipeline that would allow Russian gas into Europe, bypassing the Druzhba pipeline that links Russian gas to Europe through Ukraine. And while Berlin has demanded the release of Russian dissident Alexei Navalny, German Foreign Minister Heiko Maas has opposed new sanctions against Russia over Navalny’s worsening medical condition.

Paris similarly refuses to take a tough stance against Russia, despite the Kremlin’s attacks against France. In 2017, Moscow interfered in France’s elections, hacking the files of President Macron’s election campaign to try and help the Russia-funded ultranationalist presidential candidate Marine le Pen. The French military leadership has emphasized, and seeks to prepare for, the threat Russia poses to French (and European) security. But as French society polarizes around the issue of domestic Islamic extremism, France’s political elite would rather court the Right by confronting Turkey around Cyprus and continue (valiantly) fighting terrorists in the Sahel.

In an interview with the International Conflict Resolution Center, Dr. Stephen Blank, a senior fellow at the Foreign Policy Research Institute’s Eurasia Program, said that “on the basis of Russian activity and Russian rhetoric…Russia is at war with the West and has been for years and it behaves accordingly.” Still, France and Germany refuse to acknowledge this state of affairs, seeking to incorporate Russia into a world order based on Western values. They fail to recall that, as Dr. Henry Kissinger noted in an interview with The Economist, “there has never been an extended period where you could say Russia participated in a world order.”

Until France and Germany recognize that Russia has no interest in their overtures and understand that Ukraine’s security is synonymous with the security of Europe, the Normandy Format is pointless. President Zelensky has already tacitly acknowledged the irrelevance of the current Format, calling for the United States, United Kingdom, and Canada to join the Normandy Format.

A new forum should be arranged with the goals of peacefully restoring the Donbas territories under Kyiv’s governance, securing the territorial sovereignty of Ukraine’s pre-2014 borders, and ensuring the total independence and sovereignty of Ukraine’s government. The Minsk II ceasefire agreement, violated by Russian-backed forces on an almost daily basis, is a failure. An immediate objective of the new format should be to develop a new ceasefire arrangement.

The United States should take a leading position as a negotiator alongside Ukraine. The United Kingdom, Canada, and Turkey should also join. In honor of the original format of the Minsk II agreement, France and Germany should retain their seats. Poland and Romania, both EU and NATO countries whose national security is directly impacted by Russian actions in Ukraine, should be involved as observers. Russia should be permitted to participate in the negotiations only if Moscow will represent the ‘Donbas leadership.’ However, Russia must also accept full responsibility for all actions of the Donetsk and Luhansk ‘republics’ (especially ceasefire violations) if it wishes to participate in the negotiations.

Even should a new format as described should emerge, its ability to create a lasting and peaceful resolution to the conflict is doubtful. To actuate such a resolution, the French and German leadership must understand that Russian aggression against Ukraine directly affects European security, and act accordingly. 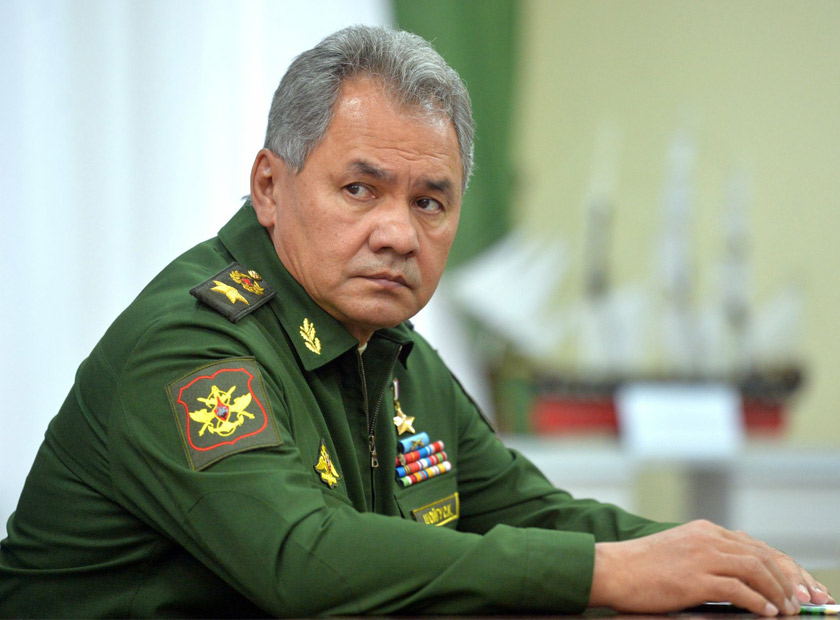 On April 22, Russian Minister of Defense Sergei Shoigu announced from the occupied Crimean Peninsula the conclusion of Russia’s snap drills. Troops deployed along the Ukrainian border and in occupied Crimea will begin returning to their bases starting on April 23, finishing on May 1.

These drills led to the deployment of 110,000 Russian troops along the northern and eastern Ukrainian border as well as in occupied Crimea. These deployments, accompanied by a massive increase in ceasefire violations by the Russian-backed Donbas rebels, and compounded by traditional Kremlin opacity, led to widespread fears of an imminent Russian invasion of Ukraine.

Relations between Russia and the West have fallen to a new nadir over this conflict. President Biden issued a new set of financial sanctions targeting Russia’s state debt, citing Russian human rights violations, its malign interference in Western democracies’ elections, the SolarWinds hack, and aggression against Ukraine (among others) as the reasons for the new sanctions.

Diplomatic expulsions have also marked this new period of antipathy. The United States and Russia have each expelled diplomats, with Russia also forbidding the U.S. (and Czech) embassies from employing Russian citizens. Russia ordered the expulsion of Alexander Sosoniuk, Ukraine’s Consul-General of the Ukrainian Consulate in St. Petersburg on April 17, after briefly detaining him on charges of espionage the day prior.

The Czech Republic has been involved in a tit-for-tat expulsion of diplomats with Russia following scandalous revelations that the GRU (Russia’s military intelligence organization) was responsible for the lethal explosion of a Czech munitions dump in 2014. With Czech officials calling the incident an act of state terror, Prague and Moscow have ordered the expulsion of diplomats. The EU and NATO have both given their support to the Czechs amidst this diplomatic imbroglio. Czech Foreign and Interior Minister Jan Hamacek has also called on EU and NATO countries to join Prague in expelling Russian diplomats in response to the attack.

The potency of the Western response has faltered because the two strongest European powers, France and Germany, have shown disinterest. Both France and Germany prefer to let the EU take the lead on standing against Russia. But the Kremlin has revealed disdain for Brussels with its snub of EU High Representative Josep Borrell in February. Berlin and Paris will need to take an active stance towards Russia if the Kremlin is to believe the West is serious about protecting its interests.

Minister Shoigu said that the snap drills had accomplished their purpose. One result was President Biden offering a one-on-one summit with President Putin. The summit proposal, rejected by Putin, was hailed as a political victory against the West in the Russian media. The new financial sanctions against Russia have also been shrugged off by a Russian economy reconfigured for stagnant autarky, with Russia selling bonds of state debt to domestic banks.

For the Kremlin, this test of Western resolve has revealed exploitable cracks in Paris and Berlin. A misunderstanding of Western resolve, like that which happened after the 1961 Berlin Crisis and led to the 1962 Cuban Missile Crisis, is more than possible. It is imperative that the West disillusion Russia of this notion to avoid a similar repeat of history.

Steps towards this goal have already been taken. The U.S. Senate unanimously passed the Ukraine Security Partnership Act (USPA) on April 22. This act commits $300 million per year to the development of the Ukrainian military. Importantly, the USPA also states Ukraine was occupied throughout the entire Soviet period. The United States should also focus on developing Ukraine’s anti-drone capabilities, as well as the lethality of the Ukrainian Air Force and Navy. Additionally, the United States and its allies should declare all goods coming from Crimean ports as contraband.

While the United States updates Ukraine’s military, the UK should reposition itself. With its goals of establishing a ‘Global Britain,’ London should build on its military cooperation with Ukraine by focusing the Royal Navy in the Baltic, Black, and Mediterranean Sea regions to pressure Moscow, rather than pester [JL1] Beijing in the Indo-Pacific. Paris and Berlin should also show solidarity with Prague and expel Russian diplomats.

The 2021 Donbas Crisis is heading towards a resolution without a clear winner. With relations at a new low, Russia and the West risk sleepwalking to an even worse confrontation. Such a crisis is avoidable, but only if the Kremlin understands they cannot blackmail the West.